Gojufus (in Japanese: ご呪符, "Spells", "Charms", or "Curse Charm") are magic talismans that receive their power from Yin and the Netherworld and are used in the art of dark magic. They were used by Hiruko Ubusuna, the main antagonist in Shinobi (2002).

Any skilled onmyouji (in Japanese: 陰陽師, "sorcerer", "exorcist", or "medium") can use the gojufu to summon magical barriers that seal off areas, summon demonic entities, and possess victims or real world objects and place them under their control.

There are four different types of Gojufu talismans with certain powers: 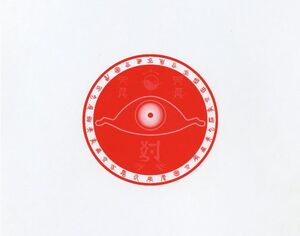 This esoteric symbol as seen on the Gojufu talismans, is used in ritual magic by Hiruko Ubusuna.
Add a photo to this gallery
Retrieved from "https://shinobisega.fandom.com/wiki/Talismans?oldid=6823"
Community content is available under CC-BY-SA unless otherwise noted.