Spider-Man is a boss who Joe Musashi encounters in The Revenge of Shinobi. Being second of the four boss characters based on well-known cultural icons, he makes a brief cameo as one of the two bosses in the sixth level of the game. In making respectable use of his likeness, and traits, he attacks Joe with his trademark webbing and overhead diving.

In the original version of the game, "Spider-Man" is implied to actually be a shapeshifting ninja. After enough damage is taken, he transforms into what appears to be Batman and continues the fight. The Batman form is edited to less resemble the DC Comics character in the second version of the game (revision 1.01), though the Spider-Man form was altered to look more like the original character, with his color changing from black to blue and the eyes being wider.

Starting from the third version of the game (revision 1.02), Spider-Man's appearance is mentioned in the game's beginning as being used under license from Marvel Comics (SEGA had obtained it to produced licensed games starring the character at the time), implying that this is meant to be the actual Spider-Man and not a shapeshifter.

Indeed, once Spider-Man is defeated, he merely leaves without changing his form, allowing the second boss of the stage to appear.

With SEGA's license to use the character having since expired, the most recent re-release of the game (revision 1.04) for the Wii Virtual Console edits Spider-Man's sprite so that he now wears a pink costume, though he will still leave the battle without transforming once defeated. 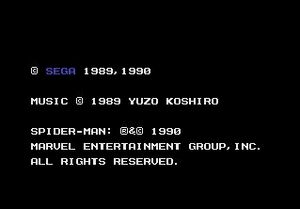 A screenshot of the copyright, which was temporarily licensed to Sega for the use of Spider-Man.
Add a photo to this gallery
Retrieved from "https://shinobisega.fandom.com/wiki/Spider-Man?oldid=6664"
Community content is available under CC-BY-SA unless otherwise noted.