The Shuriken (in Japanese: 手裏剣 hand released blade) is a staple ninja weapon used by many ninjas in the game.The shuriken used in the Shinobi franchise started out as the traditional Shaken (車剣; wheel blade) type throwing blade, but as the series got more advanced upon, it is revealed that the Oboro Shinobi's shuriken use Kunai-gata (in Japanese: 苦無型 Kunai type) shuriken; shuriken modeled after the kunai, which can be used as a projectile or close combat melee weapon.

In the Tensho Era of Japan, the kunai was originally produced as a farming instrument. The kunai was a dull blade, made of soft iron, and was used for digging, prying, smashing wood and plaster, and the various other activities that would have likely destroyed a tool that was sharpened or heat-treated. In Shinobi (1987), these projectiles can be used to harm enemies, and in Shinobi (2002) and Nightshade, they can be used to prevent enemies from moving for a brief time.

In most Shinobi games, the player can execute a special move called the Shuriken Blast, also referred to as a Shuriken Burst, which produces a sphere of the blades around the user.

Depending on the user's positioning, the shurikens will be released above or below them in a forty-five degree angle. 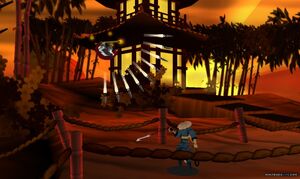 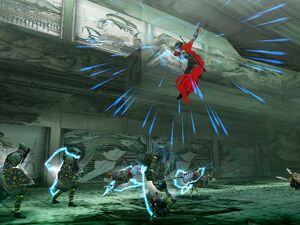 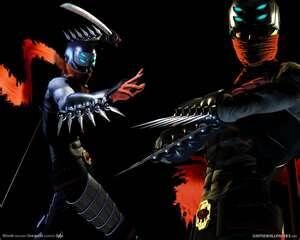 Hotsuma's gauntlets are adorned with shuriken.
Add a photo to this gallery
Retrieved from "https://shinobisega.fandom.com/wiki/Shurikens?oldid=6327"
Community content is available under CC-BY-SA unless otherwise noted.