Shinobi III: Return of the Ninja Master (1993),released in Japan as The Super Shinobi II (in Japanese: ザ・スーパー忍II Za Sūpā Shinobu II),is the third Shinobi game, and features Joe Musashi as the Shinobi. Being a direct sequel to The Revenge of Shinobi, the game consists of Joe Musashi combating Neo Zeed, the evil organization that has returned once more to take over the world.

Neo Zeed is threatening the world once more. The evil crime syndicate - thought to have been vanquished two years earlier - has returned, headed by a man known only as the Shadow Master. Joe Musashi has felt their presence, and descends from the lonely mountaintops of Japan to face his arch-nemesis once more. As the Shinobi, stronger than steel and faster than a whirlwind, the last keeper of the Oboro Ninjitsu techniques, only he can stop Neo Zeed.

Gameplay is similiar to that seen in The Revenge of Shinobi, in which Musashi must complete multiple stages, defeat enemies, and destroy bosses. His main weapons are throwing shurikens, Ninjutsu magic (both in limited supply) and various melee attacks. In addition, Musashi can now wall jump, climb across ceilings and pipes, and dash across the ground for a powerful sword slice. In two stages, Musashi also rides on a horse and a surfboard in auto-scrolling stages where he must shoot out incoming enemies. 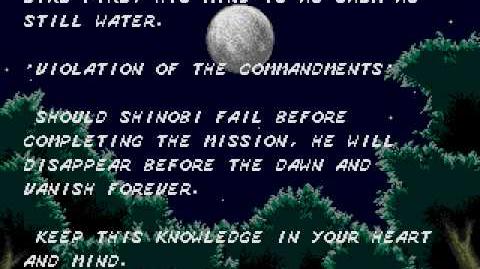 Genesis - Shinobi 3 - Return of the Ninja Master Intro
The opening video of the game.
Community content is available under CC-BY-SA unless otherwise noted.