Shinobi is a 3D action videogame that was developed by Overworks and published by Sega as part of the Shinobi series. It was released for the PlayStation 2 console on November 10, 2002 in North America; December 5 in Japan; and May 15, 2003 in Europe. The game features Hotsuma, a new shinobi, and takes players on a quest to defeat a malevolent sorcerer and the hordes of demonic Hellspawn.

Shinobi was originally planned for the Dreamcast, but because of the the console's discontinuation, the game was moved to the PS2. The game was designed to place emphasis on the action elements of action-adventure gameplay and appeal to the action market. Upon release, Shinobi was generally well received by critics. A comic book adaptation, soundtrack album, and sequel entitled Nightshade were also released.

Shinobi is a third person 3D action game. The player guides protagonist Hotsuma through eight levels that each consist of two sections and a boss battle. The first section of each level consists of a series of enemy encounters, in which the player must defeat a certain number of enemies before they can proceed. In the second section of each level, the player must locate and destroy a number of targets, which maintain a magical barrier that blocks their progression. While these levels contain enemies, engaging them in combat is optional.

The combat is fast paced yet simple and involves large numbers of recurring enemies. In combat oriented levels, the player must kill enemies in a quick and efficient manner. Hotsuma's sword, Akujiki, is his primary weapon, and the player can use it to execute a basic four-move combo by repeatedly pressing the square button. This combo can only be done on the ground; although the player is free to attack repeatedly while in midair, Hotsuma will only execute a single type of attack. Additionally, and while on the ground, the player can hold the square button to charge Hotsuma's sword and release a devastating slash attack. It is also possible to execute a forward thrusting spin slash that will knock foes to the ground, and Hotsuma can kick his foes to break their guard. Akujiki devours the Yin of its fallen enemies; if no enemies are slain, the sword will eventually begin to consume Hotsuma's Yin to compensate. If Hotsuma's Yin is fully depleted, the sword will begin to consume his Yang, and Hotsuma will die when his Yang is depleted. Therefore, it is in the player's best interest to ensure that Akujiki's hunger remains sated.

When the player kills a foe, the foe's body will remain frozen in time, and a timer will begin to count down. When the timer reaches zero, the enemy's body will decompose. If the player can kill another foe before the timer reaches zero, the timer will reset to its initial position, and the player will have an opportunity to kill yet another enemy in order to maintain a kill streak. If the player can kill a group of four or more enemies before their bodies disintegrate, a tate (in Japanese: 殺陣) attack will be executed, which will release a larger portion of Yin for Akujiki to consume. The tate executions give players an incentive to kill all enemies as quickly as possible. As the player maintains a kill streak, Akujiki's power will temporarily grow, and this growth is represented by a blue or bright magenta aura that surrounds the sword's blade. When augmented in this fashion, Akujiki is incredibly powerful and can easily slaughter the game's strongest enemies, including a majority of bosses, in a single hit. Therefore, in order to maintain a full supply of Yin and to augment Akujiki's power, the player is challenged to acquire a fluid and uninterrupted string of kills.

In addition, Hotsuma can perform a number of non combative moves that primarily aid his ability to traverse an environment. He can jump, hang on walls, and utilize the stealth dash, which is a move that propels him forward and leaves an ethereal afterimage in his wake. Enemies may briefly focus on the afterimage, so the player can use this move to avoid taking damage. Unfortunately, Hotsuma can only jump twice; he can perform an initial jump that takes him airborne, and a second midair jump that will allow him to ascend slightly higher. However, as long as Hotsuma's sword makes contact with a foe, his stealth dash will be replenished, so it is possible for the player to use the stealth dash in midair to maintain their airtime. This can be done by repeatedly attacking an enemy, stealth dashing in between attacks, and dashing to attack another nearby enemy before Hotsuma falls. This is especially useful when the player is given the opportunity to maintain a kill streak while moving between platforms.

Although Hotsuma will primarily use Akujiki to defeat his foes, he carries a small arsenal of secondary weapons. He can use shurikens to briefly paralyze his enemies, which is useful for attacking foes that can parry standard attacks. During the apex of a double jump, and as long as Hotsuma is carrying at least eight shurikens, a shuriken burst can be executed, which is a move that will launch shurikens in all directions around Hotsuma's body. This is useful for paralyzing an entire group of enemies at once. Additionally, Hotsuma can use three types of ninjutsu: Ka'en, a fire based area-of-effect attack; Kamaitachi, a ranged shock wave attack; and Raijin, which grants him invincibility for a short period of time. If the player wishes to effectively kill enemies and traverse the environment, then learning to master all of these basic aspects of gameplay is essential.

Hotsuma and Moritsune, two brothers who were raised in the Oboro clan, were seldom apart in their youth, but their fates were sealed when they discovered the ancient demon blade, Akujiki. In a savage ritual that was held to decide the clan's next leader, Hotsuma used the demonic blade to end his brother's life.

Four years after the fated duel, Hotsuma is haunted by the memory of his deceased brother. However, when Tokyo is shaken by an incredible earthquake, and a golden palace rises in the heart of the city, Hotsuma is forced to investigate these mysterious circumstances and ultimately learn who is responsible for murdering his entire clan and unleashing the chaos. 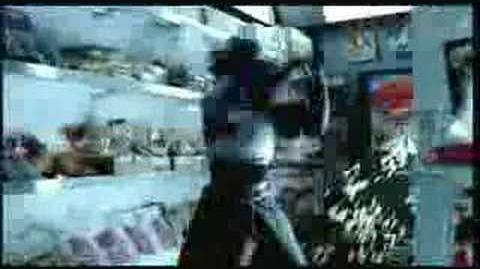