Colonel Sarah Krieger is a lady soldier in charge of the special ops unit opposing ZEED.  Her true identity is a mystery, but the only clear thing about her is her hatred of ZEED. Strangely she bears a resemblance to Jiro's lost beloved, implying she could be of Japanese American origin. She is known to be an expert markswoman, and has an uncanny ability in martial arts second only to Jiro himself. It is also implied she holds secret feelings for the young Oboro warrior.

Sarah is a women in her mid twenties with short black hair and bluish black eyes. She wears a dark blue soldier outfit with dual gun holsters and combat boots. She also bears an uncanny resemblance to Jiro's lost lover.

While investigating a strange energy read out on ZEED Island she meets the unconscious Jiro, and takes him in. But Jiro's sudden attack upon waking up causes them to be in awkward positions, as she does not know if he's a ZEED ninja or not.

While Jiro was trying to escape ZEED City, Sarah explosively lays waste to the ZEED Ninja forces attempting to eliminate her, and Jiro watches her depart. Sometime later, ZEED attacks the Carrier Ship she and her team belong to, and to her amazement, Jiro steps in and protects the ship. Seeing him in a new light as an ally, she and a team of soldiers follow him to the ZEED Sky Laboratory, where he escapes and grabs on to their chopper. She saves him from dying and pulls him aboard, and Jiro is welcomed by her as a comrade-in-arms.

After Jiro and Sarah become better acquainted, the two hold a strategy meeting, where Jiro is explained to about ZEED HQ, and is given the mission by Sarah to infiltrate the base. Jiro gladly accepts his role, and vanishes, leaving Sarah and the crew. Sarah turns and sees him gone, and silently hopes he makes it back to her safely.

As she and Jiro battle through ZEED forces through the Shadow Temple, she finds herself under attack by ZEED's leader, the Shadow Master. His speed begins to overwhelm her and he slashes one of her guns rendering it useless. Just as Sarah was about to be killed, Jiro appears and saves her. She stumbles on her destroyed gun and accidentaly shoots the Shadow Master's mask. It is here that Jiro makes the shocking discovery that the Shadow Master is both the Lord of the ZEED group he was sent to kill in the past, and worse yet his own teacher. She escapes and leaves Jiro to battle his traitorous master, as the two ninja take their deadly battle to the stars.

A strong willed woman with a huge sense of duty and responsibility, Sarah is a brave soul unafraid of danger. Initially when she met Jiro, their meeting was uneasy, as she did not know if he was a ZEED member or not. She also holds a great hostility towards ZEED. After watching Jiro defend her Carrier Ship she begins to see that he is not a ZEED ninja, but a true Oboro Ninja, and in time begins to warm up to him. After saving his life, she begins appear to develop feelings of admiration for him. 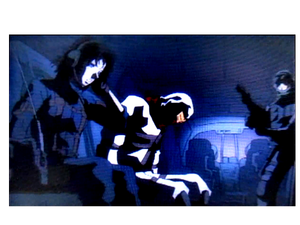 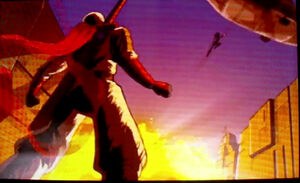 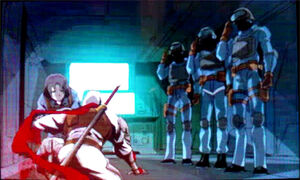 Jiro and Sarah; comrades at last. 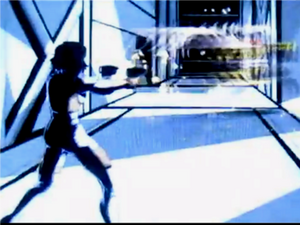 Sarah Vs the Shadow Master.
Community content is available under CC-BY-SA unless otherwise noted.
Advertisement