"Let's see how well you can fight... And please, don't disappoint me." — Kurakuda

Kurakuda (玄九蛇) is one of the Four Hellspawn Lords and a villain in the 2002 videogame Shinobi.

He appears to be loosely based on the Nine-Tailed Fox from Japanese mythology, except that he has the upper body of a male human with a Japanese fox mask on his face, the lower body of a snake with a snake's head at the end, and carries a golden structure on his back with eight fan-like tails and a giant fox head at the top.

Kurakuda was present along with his fellow 3 Hellspawn Lords during the onslaught of the Hellspawn on modern-day Tokyo. They were onece again summoned by Hiruko to help rule the Earth as they were before years ago before they were stopped and defeated by the warriors of the Oboro Clan.

After his return upon the present-day world, Kurakuda suddenly appeared and held Kagari Ubusuna hostage before fighting Hotsuma. He instantly and clearly reconignized the blade wielded by the last Oboro ninja leader to the cursed sword Akujiki. He demanded Hotsuma to fight him if he is to save Kagari. The two fought and Kurakuda himself lost the battle. He was the third Hellspawn Lord to be killed.

Kurakuda, as a Hellspawn Lord, possesses strong demonic powers and great fighting skills that makes him a mighty foe to face. He can teleport himself anywhere and can summon swarms of his slithering Hellspawn "pets" called Kurohebi. 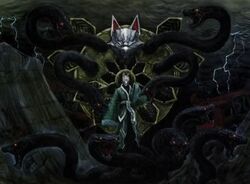 Kurakuda upon his arrival in modern-day Tokyo. 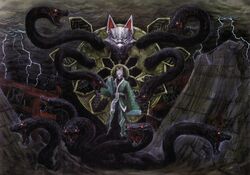 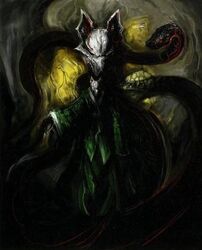 Kurakuda, one of the four Hellspawn Lords. 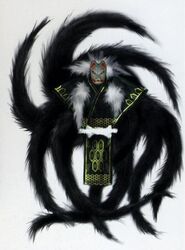 An artwork of the alternate form of Kurakuda. 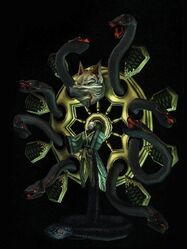 Kurakuda
Community content is available under CC-BY-SA unless otherwise noted.