The Body Weapon, codenamed "Hydra", is a hideous gigantic monster bio-engineered by the Neo Zeed crime syndicate and the 3rd boss in Shinobi III: Return of the Ninja Master.

This horrid mass of failed bioweapons was dumped in the acid filled sewers beneath a Neo Zeed-controlled laboratory, but somehow adapted to the acid and merged into this gigantic and grotesque monstrosity with deadly spores and near perfect aim, able to fire off a devastating laser beam.

It is no secret that Neo Zeed has always used science and laboratories to conduct unimaginable bio-chemical experiments with genetics. However, it is known only to very few that the organization dumps its waste and failed leftover experiments into the acid filled sewers below one secret lab. There, a certain number of these experiments managed to adapt to the acid and even assembled themselves to create a massive and hideously grotesque lifeform; Hydra, the Body Weapon.

Zeed's scientists came across the beast, but were unable to fully control it, so they locked Hydra deep within the sewers of the laboratory, where Hydra would use its ability to self reproduce and create traps to capture its hapless prey and destroy it, assimilating them and their powers as its own.

Being able to sense the Oboro ninja warrior Joe Musashi upon his descent into the waste-ridden sewers of the secret laboratory, the repulsive organism attempts to lurk in the shadows and ambush him. Despite the creature being the embodiment of past failed experiments, it lashes out at its prey with a giant deformed human-like hand, and it has a near-perfect aim with the laser it is programmed to target and shoot from its mouth due to discarded laser devices that have become merged with Hydra. After failing to destroy Musashi from a distance, the vicious beast attacks head-on.

Within its gigantic reach it forces Joe to attack from a distance. As the battle intensified, the more damage was dealt the darker its skin tone turned from ruptured blood vessels. Seeing this Joe took advantage until with one final strike of his sword, the grisly monstrosity before him drew its dying roar as it crumbled back into the toxic waste from which it came. 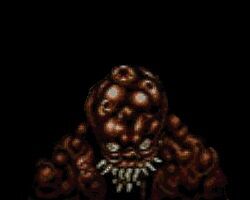 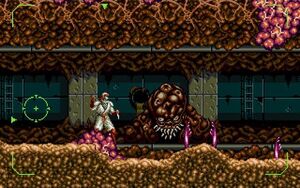 Joe Musashi throwing a shuriken at The Hydra. 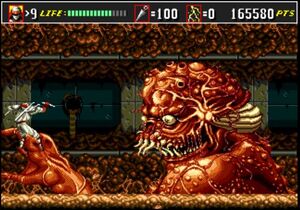 A screenshot of Hydra The Body Weapon harming Joe Musashi. 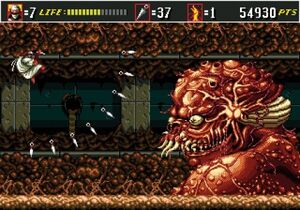 Joe Musashi utilizing the Shuriken Blast to harm the Hydra. 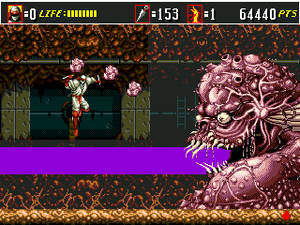 Joe Musashi jumping to avoid a laser spit by The Hydra 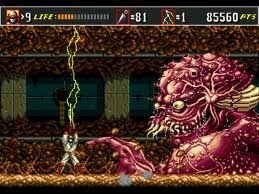 Joe Musashi utilizing Jutsu of Ikazuchi against The Hydra.
Community content is available under CC-BY-SA unless otherwise noted.
Advertisement